Your Own Private Home In Paradise
Make a Payment
Search Rentals 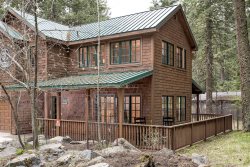 A modern day treehouse at Wallowa Lake while you stay at the Ram's Head.

Construction of the Wallowa Lake Tram began in 1968. However, the first year of operation wasn’t until 1970.  The High Wallowas operated with the use of a US Forest Service Permit.  Then, in 1985, the business changed hands and became what is now known as the Wallowa Lake Tramway.

Floating on a Cloud and the views are amazing.

The ascent up Mount Howard is awe inspiring.  It is very quiet, just a little humming sound can be heard from within each tram car.  When you go over the towers, it makes a grumbling sound, but in between towers you have the feeling of just floating on a cloud.  It is peaceful.
The scenery all along the way, as well as at the top, is amazing.  From the top of Mount Howard you can see parts of Oregon, Idaho, and Washington while hiking the approximately 2 miles of hiking trails.  You will get the opportunity to see various wildlife and visit beautiful alpine meadows where one particular plant, lamatia, is said to grow only on the top of Mt. Howard and Ruby Peak within the United States.

The Wallowa Lake Tramway has some impressive vitals attached to it. The Tram is Swiss made and is known for being the steepest vertical lift for a four passenger gondola in North America.  It takes a quick 15 minute ride up (as well as back) to get to the top of Mount Howard.
The Tram operates on a single continuous loop cable, 19,300 feet in length or roughly 4 miles long.
You travel 690 feet per minute.   The elevation at the base terminal is 4,450 feet and within your 15 minute ascent, the top terminal elevation is 8,150.
The Tramway was named after Major General Oliver O. Howard who pursued the Nez Perce from here in 1877.
There are 25 towers, tallest is at 74 feet.  Highest point off the ground is between tower #4 and #5 at 120 feet.  Lowest point off the ground is between tower 17 & 18 at 3 feet.
The tram operates seasonally, May thru September with hours starting with the first ride up the mountain at 10 and the last ride down at 4.

My Grandfather was a stake holder in the High Wallowas

Every year before school starts, the kids and I do a trip someplace.  A few years ago, I took them up the tram and explained to them that not only is this a beautiful way to spend the day, but that we have history tied to the beginning of the High Wallowas.

My grandparents, Keith and Ruth Taylor had several businesses in Wallowa County during their time that they lived there.  One very popular business was the Circle T Restaurant and the Fireplace Lounge located in downtown Enterprise.  This is the business that you most often hear their name associated with.  Rumor has it that Gramma ran the cleanest café in town, and would only shut it down for a few hours each week to do a deep clean.  Otherwise, the Circle T was always open, all hours of the day, every day of the week.  I often hear stories of how people met, fell in love over the register (that is my parents love story), the recipes and how it was “the place to be” in Wallowa County.
The other business that they had was the Tramway.  My grandfather Keith, was one of the first owners of the Tramway and was the first President of High Wallowas, Inc.  He and the other stockholders were the ones that started the construction of the Tramway in the late 1960’s.
My parents Jim & Jayne owned 2 shares of stock, priced at $100 each, and back in the late 60’s, that was a lot of money.  When asked what happened to the stock, Mom said that the company went bankrupt and they threw the stock papers in the garbage.  How fun that would be to see those papers now!
My husband and I both worked for the Tramway when we were in high school.  After the kids and I spent the day up on the mountain on our “last hooray”, both of our kids decided that they wanted to work there too.  When we were coming down the mountain, it stopped moving for just a few minutes, and both kids quickly changed their minds of being future Tram workers when I told them we used to practice rappelling out in case of emergency.   It was a great day spent being a tourist at Wallowa Lake!

The variety of uses of the Tramway are far sweeping.
Back in the early 1980’s it became a hot topic around Wallowa County about building a ski area on Mt. Howard.  Ben Banks, the manager at that point, stayed open one winter and tried his hand at running a ski operation.  The skiers would ride the Tram up, ski down as far as the snow would allow, and then hitch a ride back up behind a snowcat.  Mr. Banks proved that year that a ski area was probable, but the financial side just didn’t pan out.
While the skiing has become a thing of the past (thanks to Ferguson Ridge taking its place), the Wallowa Lake Tramway has become a very popular place to have a wedding!  Couples and their families can qualify for a group rate, celebrate the marriage of their loved ones from atop one of the most majestic mountain tops in Wallowa County.

Whether you spend your family vacation swimming in Wallowa Lake, visiting our many shops, or your days on top of Mt. Howard, head back to your cabin at the resort side of Wallowa Lake.  We appreciate being a part of your vacation memories!

Jump to a Rental